Goes to show you "CAN" keep a secret! 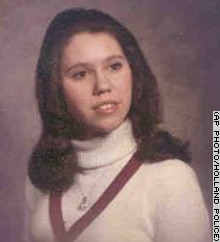 Who Killed Janet Chandler?It is odd for six to have kept a secret like this for 27 years.

For more than a quarter century, the brutal sex slaying of Hope College student and hotel clerk Janet Chandler baffled law enforcement officials.As the case grew colder with each passing year, it became less likely that whoever was responsible would be brought to justice.

Then, a few years ago, a film class at Hope produced a documentary about the unsolved mystery that sparked new interest in the case. After the film aired on a Grand Rapids television station in January 2004, investigators started getting tips again.

Following up on the new information, they arrested Robert Lynch, 66, of Three Oaks, in February of this year and charged him in connection with the 1979 homicide.

Michigan Attorney General Mike Cox announced Wednesday that five more arrests had been made, including four men and a woman who was the victim's roommate and boss. They were taken into custody Monday and Tuesday in Michigan, Pennsylvania, West Virginia and Wisconsin.

"It has always been the mission of all parties involved in this investigation to ensure that the family of Janet Chandler sees justice. That day is now coming closer," Cox said during a news conference.

The five men, including Lynch, were working as security guards for the same company at the time of the killing and were in Holland because they were on assignment at a local labor strike.The victim's parents, James and Glenna Chandler, of Muskegon, attended the news conference but declined to speak to reporters.

Authorities said Janet Chandler was working her job as a clerk at the Blue Mill Inn on January 31, 1979, when she was kidnapped by the six suspects and taken to a house where she was beaten, raped and strangled.

A snowplow driver discovered her body a day later about 35 miles south of Hollad in a wooded turnaround on Interstate 196.

Parker's sister Annette Bennett said her brother had left Michigan a day or two before Chandler was killed and was in West Virginia when it happened.

"My brother is innocent. My brother would not hurt a flea," said Bennett, 41, of Belle, West Virginia.

Nelson's attorney, public defender Ronni Sheets, said she had not met with him and had no comment. Attempts to reach the other suspects' attorneys or relatives for comment were unsuccessful.

Holland police Chief John A. Kruithoff said all five were taken into custody in their hometowns. Like Lynch, the five new suspects were arrested on warrants charging each of them with three counts of first-degree murder.

Each person is charged with premeditated murder and committing a murder during the commission of two other felonies, which in this case included kidnapping and criminal sexual conduct.

While authorities declined to rule out the possibility of more arrests, Kruithoff said they were "confident we have identified those responsible for Janet's death."
Posted by Sharron Prior website at 8:35 am No comments: