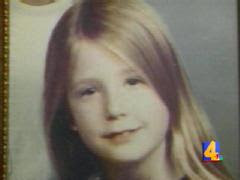 Here is another case that has been solved! How many years ago?? 33 years ago (1975) Marcia Trimble
disappeared while delivering Girl Scout Cookies, Marcia was 9 years old, she was found 33 days later murdered...
For the past 33 years, more than two generations of police officers have worked tirelessly and invested thousands of hours of investigations into bringing solutions to this terrible, terrible crime," .....this continious hard work has seen Marcia's killer caught and indited by a Grand jury.

"never say never"
Posted by Sharron Prior website at 5:37 pm

You're very welcome, Doreen. As you know, my first commitment is to 'Who Killed Theresa Allore?' but Sharron's case is also very important to me. This year, there have been several cases from 1975 that have been solved (many using DNA) and each time I come across such stories, I cannot help but hope that Sharron's will be next...I really do. I think you do have DNA from Sharron's case and I do believe that that is what is going to solve Sharron's case...it is solvable, even after all this time...those other solved cases prove that.

Thank you, Doreen
Although this story is very sad, it always pleases me to read about a cold case being solved.
I feel that the solving of each cold case brings us a little closer to the day we always hope will come.
Stories like this give me hope.